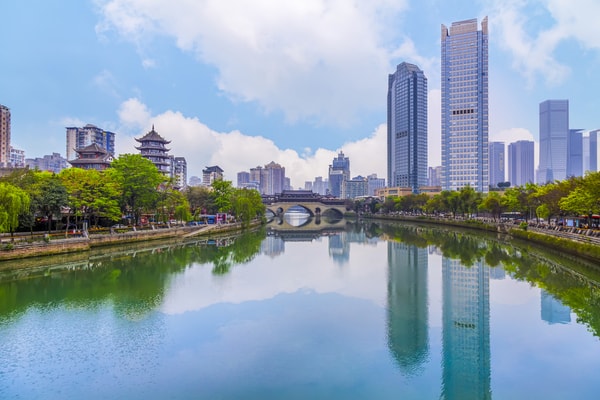 Chinese people identify Beijing as the cosmopolitan city of “opportunities”, Shanghai is often associated with fashion; Guangzhou with money and Chengdu with the joy of living. And that is precisely what has made the people of Chengdu famous: knowing how to live well. With a population exceeding 14 million inhabitants, Chengdu is located on the western edge of the Sichuan Basin. As a result of its strategic geographical location, this temperate and humid city, where it rains practically all year round, acts as a gateway to the southwestern region of China and also acts as the economic, commercial and financial center of southwestern China.

Chengdu also plays a key role in transportation and communications in that area, having a well-developed transport system. Another of Chengdu’s virtues are related to education; among the most prestigious universities are the Sichuan University, the University of Electronic Science and Technology of China, the Southwestern University of Finance and Economics, and the Southwest Jiaotong University.

Chengdu has undergone a great economic development during the last years. In 2017, Chengdu’s GDP grew 15 % compared to the previous year, becoming the largest economy in Sichuan and the largest economy in central and western China. Chengdu now has six pillar industries: electronics, pharmaceuticals, food processing, machinery (including automotive and aerospace), petrochemicals, metallurgy and construction materials. The service sector has surpassed the industry sector as the main factor contributing to Chengdu’s economy since 1991. Tourism is one of the pillars of the Chengdu service sector. In 2017, the number of tourists who arrived in the city was 67.38 million people, with a growth of 20.5 % compared to the previous year. The city has renowned places like the Wuhou Temple, the thatched Du Fu Village and the pandas of the Wolong Nature Reserve. Around Chengdu, there are also popular places, such as Mount Emei, the Great Buddha of Leshan and Jiuzhaigou.

Regarding food, the “Chengdu sandwiches” enjoy great prestige with their unique colours, aromas, shapes and flavours. These include the Lai Tangyuan (glutinous rice flour balls served in soup), the Longchaoshou (ravioli soup known as “wonton” in northern China) and the Dandan Noodles.

Jinjiang district has the most important group of financial establishments in western China and most of the overseas banks and insurance corporations in Chengdu have their offices within the district. Also, the housing economy is growing in a healthy way. Nowadays, Chunxi Road, nearby the Dongda Street, becomes the core area of the retail trade where high-end and luxury brands are available, and it’s a great place for expats to live in and experience the retail market in Chengdu.

Wuhou District is where remnants of the culture of the Three Kingdoms can be found and it is also a pleasant enjoyable new district. In a few years, this space will transform itself in a fantabulous innovative trendy district with the best level of modernization, optimized economic development mode and also the best social harmonious surroundings.

Qingyang District has the best air quality and a many parks surrounding the area as well as a high growing rate in parks and green public areas. It also accommodates the most luxurious houses in urban Chengdu. Wide and slender alleys are found here and the primary historical sites in Qinyang district are the Du Fu Thatched Cottage repository and Qingyang Temple. Additionally, it is the permanent venue of the International pageant of Intangible Cultural Heritage. It also features Tianfu square, People’s Park, Cultural Park, Baihuatan Park, Lvzhou Park and Supo Sports Park. The district houses the Shishi Middle School and plenty of different national model middle schools as well as the Southwestern University of Finance and Social Science and other institutes of higher education, making this area a great place to settle.